Tecroveer, our distributors of VOLUTE™ Dewatering Press in South Africa had succeeded to win a big industrial project in a poultry farm in Rustenburg which is a town located 130 km north-west from Johannesburg.

This poultry farm is the biggest chicken processing plant on the Southern hemisphere. The average production is around 400,000 chickens a day. The company employs over 5,000 people working on three shifts schedule. The production itself runs 20 hours a day followed by 4 hours of maintenance. 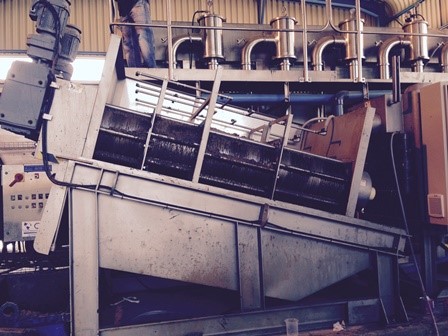 VOLUTE™ Dewatering Press ES-352 was placed in the wastewater treatment plant to dewater sludge from an advanced DAF technology called GEM (Gas Energy Mixing System). The product – nutritionally rich cake was transported to the cookers and added as a component to the by-produced animal feed.

Our key to successfully unlock the process is the unique dewatering drum design. Layers of spacers and rings (fixed and moving) construct a cylinder.

The moving rings which are slightly smaller than the outer diameter of the screw and slightly narrower than the spacers are located between the fixed rings and are moved by the screw. Moving rings continuously clean sludge off the gaps and prevent from clogging. This is the secret self-cleaning movement which enables to handle oily and greasy sludge without any issues.

Overall, end user was very satisfied with the VOLUTE™ technology and left a voice as follows:

“We had to replace old DAF unit for new one and include dewatering step in the process. The new DAF unit is GEM and for dewatering we use AMCON’s VOLUTE™ Dewatering Press ES-352. The VOLUTE™ has reached exceptional results. We are now running the whole effluent plant ourselves and everything is running smoothly. Thanks guys for sorting-out those problems.“

The Chicken Litter Turned into Digested Sludge as a Feedstock for a Biogas Plant
September 7, 2022