Our basic policy was to come up with a filtering method other than using a belt, which is structurally accompanied with clogging problems.

We looked at five principles including "centrifuge", "screw press", "filter press", "belt press", "vacuum dehydrator", and we chose "screw press" principle which does not require a belt and consumes the least power of all.

Comb to remove the clogged materials 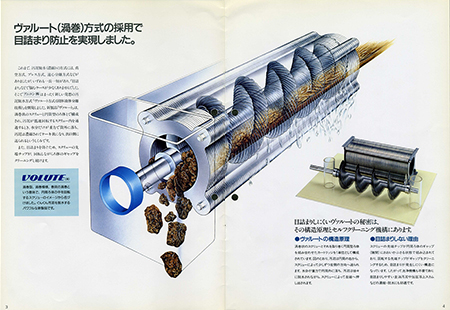 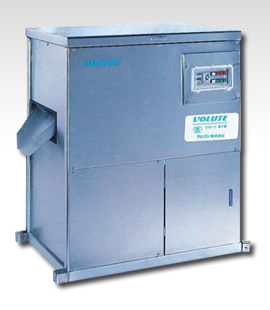 How to prevent clogging?
Members of research and development (R&D) group spent all day thinking about this matter.
In 1988, they came to a conclusion.

How about having something to remove the clogged materials?

Subsequently, prototype with this feature was brought to a communal septic treatment plant which we operate for testing. We had great test results and we informed the results to various companies and research institutes to gather improvement ideas.

With help of companies which have highly praised this "combing principle" since the time of development stage, we succeeded in installing our first unit in fall of 1990.

In response to the first installation, the product was officially brought into the market in April 1991 as VOLUTE™ Thickener/Dewatering Press, taking its name from the term "VOLUTE™ " which means spiral or helical. 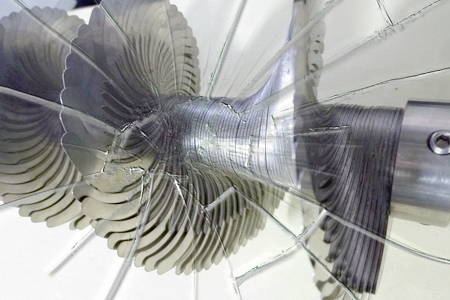 Because of the great start, not only R&D members but also everyone were in great satisfaction.

If we can increase the market share of VOLUTE™ Dewatering Press by making improvements as we are doing now, we can dramatically change the sludge treatment in Japan!

And then, a phone rang.

That was the first word from the client to explain the issue. Subsequently, we received a number of calls for the same issue.

I don't understand. What is going on ?

R&D members went down to the site as soon as possible to find out the issue.
And it was found that the cleaning comb snaps off only after a few hundred hours of total operation.

Various suggestions were made to solve this issue.

Any possible solution was considered and tested and then R&D members came to a hopeless conclusion.

Layering structure itself is the issue.

Material, surface coating, manufacturing precision, neither of them had nothing to do with the issue.

No matter how precise you have the structure of the combs, the pressure will mainly applied to the combs, breaking them down eventually.