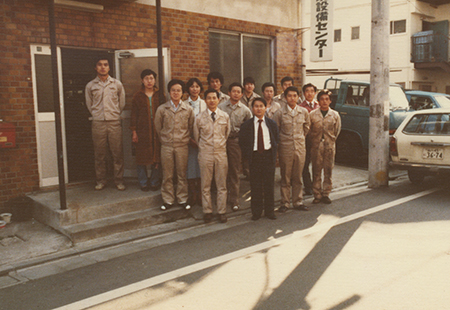 Nowadays, AMCON is generally regarded as a manufacturing company, but actually, its main business at the time of foundation was maintenance of septic tanks and wastewater treatment facilities.

But how could such maintenance company come up with a unique and original technology like "VOLUTE™ Dewatering Press"?

The answer to this question is our Passion, creativity and continuous effort which all incorporated into our spirit, "AMCON do it as nobody else does".

Start of water and sludge business

Although maintenance of wastewater treatment facilities was uncommon business in a place like Japan where sewerage system is quite developed, there were still septic tanks installed in housing estates in those days.
Septic tank like sewage treatment plant also has a role to remove contaminants from wastewater for purification. Purified water then was returned to the nature and the remaining muddy liquid known as "sludge" was carried by a tanker truck to another treatment plant where human waste was treated.

Sludge thickening and dewatering systems at that time were mainly designed for large-scale wastewater treatment plants and were very costly. For that reason, it was unlikely for small housing estates where we had business to have such system in their wastewater treatment systems.

Nevertheless, high sludge transportation cost was borne by the citizen as facility maintenance fee and because of the budget issue of the maintenance company, the accumulated amount of sludge just remained as it and people were often turning a blind eye to this issue.

The founder, Masaaki Sasaki spotted this issue and he decided to somehow treat the accumulated septic sludge in a proper way. 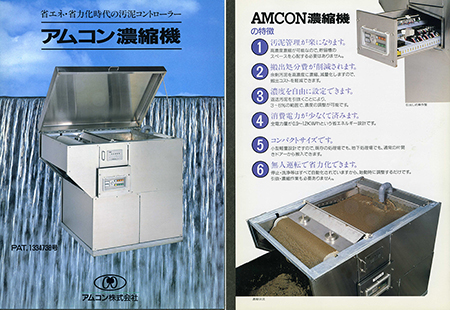 In 1982, after having thought about becoming a manufacturer, founder developed the first product, "Belt Thickener". It was compact with reasonable price and the thickeners were mainly installed in septic tanks for housing estates. 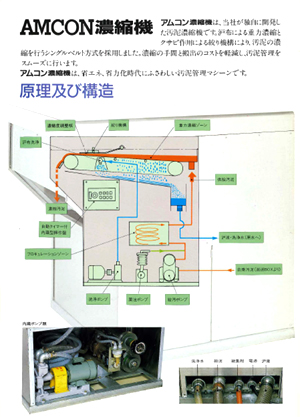 In order to prevent clogging, high pressure water is commonly sprayed on the surface of the belt from the bottom, but the amount of water used was tremendously high and the time and cost for replacing the belt was another issue on which we needed to focus as our next step.
Potable water not economically but can effectively clean the belt whereas treated water costs less but requires an extra filter stage to remove the suspended solids in water and also replacement of the filter as a result....

We do not only manufacture products but also use the products by ourselves.

As a company who understands the feeling of the users, we were not satisfied at all with the current product, as long as there is still something which needs to be improved.

10 years since our first product was brought into the market, challenge for operators to treat their sludge meant to us the beginning of our challenge to reduce rinsing water consumption and prevent clogging problems.